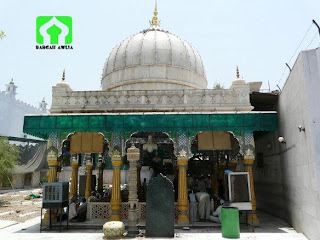 Hazrat Khwaja Qutbuddin Bakhtiyar Kaki r.a. was born in 569 A.H. [1173 C.E.] in a town called ”Aush” or Awash in Mawar-un-Nahar (Transoxania). Khwaja Qutbuddin’s r.a. original name was ”Bakhtiyar” but his title was ”Qutbuddin”. The name ”Kaki” to his name was attributed to him by virtue of a miracle that emanated from him at a later stage of his life in Delhi. He also belonged to the direct lineage of the Holy Prophet Muhammad s.a.w.s., descending from Hazrat Imam Hussain r.a.. Hazrat Khwaja Bakhtiyar Khaki r.a. was one and half years old when his father passed away. His mother arranged for him very good education and training.

When Khwaja Qutbuddin r.a. intended to kiss the feet of his Pir-o-Murshid and seek his permission to depart, Hazrat Khwaja Sahib understood it and asked him to be nearer, and when Khwaja Bakhtiyar r.a. stepped up and fell at his Pir’s feet, Khwaja Mu’inuddin r.a. raised him up and embraced him affectionately. AFateha was then recited and Khwaja Mu’inuddin r.a. advised his Murid: “Never turn your face from the right path of Sufism and Truth. Prove yourself to be a brave man in this Divine Mission.” When he again fell at the feet of Khwaja Mu’inuddin r.a. overwhelmed with love and grief at this tragic hour of parting, he was again raised and embraced affectionately by his Pir-o-Murshid. Following this order, he went to Delhi and stayed there. It was the period of Sultan Shamsuddin Iltutmish.

Hardly twenty days had passed when news was brought by a messenger that Hazrat Khwaja Gharib Nawaaz r.a. disappeared into the eternal Divine bliss of the Almighty Allah.

It is narrated that in the early stages of his life, Hazrat Khwaja Qutbuddin r.a. would take a nap, but in the last part of his life he kept awake all the time. He had also committed the Quran to memory and used to recite and finish it twice daily. Whenever anything came to his Khanqah, he quickly distributed these to the poor and needy. If there were nothing, he would request his attendants and mureeds to distribute plain water as a humble token of his hospitality.

Sheikh Nur Bux has written in his book entitled”Silsila tuz’zah”: “Bakhtiyar Aushi was a great devotee, mystic and friend of Allah. In private and public he was indulged in the remembrance of Allah. He was habituated to eat little, sleep little and speak little. He was a towering personality in the world of mysticism.”

He had no parallel in abandoning the world and suffering poverty and hunger. He kept himself engrossed in the remembrance of Allah. Whenever someone came to him he would come back to his senses after a while and was then able to talk with him. After a very brief exchange he would show his inability to continue any longer and slipped into the same state of absorption once again.

Once Hazrat Khwaja Qutbuddin r.a. was coming back with his relatives and disciples after offering Eid Salah [Eid prayers] that he, all on a sudden, halted at a place in silence. After a while his relatives submitted: “Today is the Eid day. Many people would be awaiting his arrival.” Having heard this Hazrat Khwaja r.a. came out of his lost state and uttered, “From this piece of land I have the smell of the perfect men.”

Thereafter, he came home and after the meal was over, he asked the people to call the owner of the land to him. When the owner came to him, he purchased that piece of land from him. Later, Hazrat Bakhtiyar r.a. was buried in the same soil.

Death also came to him in an unusual manner. It is stated that once in an assembly of Sama [religious music] he happened to hear a verse of Hazrat Ahmad Jam with the meaning: ”Those who are killed with the dagger of surrender and pleasure get a new life from the Unseen.”

Hazrat Khwaja Bakhtiyar Kaki r.a. was so much absorbed in and inspired with this verse that from that day on he kept on reciting it in a state of unconsciousness and gave his life in the same state. He remained in this state of Wajd for 3 consecutive days and expired on the 4th day. He passed away on the 14th of Rabi-ul-Awwal 633 A.H. On account of his extraordinary death, Hazrat Khwaja Qutbuddin Bakhtiyar Kak ir.a. is known as ”Shahid-e-Mohabbat” or Martyr of Allah’s Love.

Our Application For Mobile